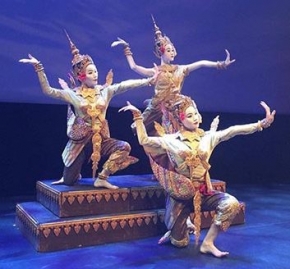 15th Anniversary of the Royal Ballet of Cambodia’s inscription into

Since its inception into the UNESCO Oral and Intangible World Heritage back in November 7th, 2003 thanks to the hard lobbying of then-Minister of Culture and Fine Arts, H.R.H. Samdech Reach Botrey Preah Ream Princess NORODOM Buppha Devi of Cambodia, who was Herself the Prima Ballerina in the sixties - and Eldest Daughter of His Majesty the Late King Father Preah Karuna Preah Bat Preah Borom Rattanak Kaudh NORODOM Sihanouk –, the Royal Ballet of Cambodia has enthralled all public around the World during their numerous Tours in France and Europe, in Monaco’s “Printemps des Arts” at the invitation of S.A.S. Princesse Caroline de Hambourg, in New York City’s “Seasons of Cambodia”, in Morocco’s Fez “Festival des Musiques Sacrées du Monde” at the invitation of His Majesty King Mohamed VI, as well as in Japan, Austria, the Kingdom of Bahrein, Mexico and the United States, to mention a few of the countries where the Royal Ballet of Cambodia has since performed.

“Metamorphosis”, Princess Buppha Devi’s latest creation, premiered in Paris during the “Season of Cambodia” in Europe, commemorates the encounter of famous French sculptor Auguste Rodin with the Royal Ballet dancers during the State Visit of King Sisowath in France, back in June 1906. The Royal Ballet of Cambodia is becoming de-facto, the prestigious Ambassador of Khmer Culture and Heritage for the whole world to marvel at!

For those who didn’t get to attend the legendary dancers’ European Tour last May 2018, Save the dates  Friday 18th & Saturday 19th January 2019 for two exceptional performances of “Metamorphosis” by the Royal Ballet of Cambodia at Chaktomuk Theater in Phnom Penh.

Tickets can be purchased through our offices in Phnom Penh.