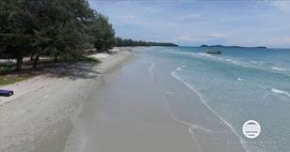 Enchanted by Cambodia, the Kingdom of Wonders is 52 minutes of mesmerising eye-candy: the Bou Sra waterfall in Mondulkiri, the Kizuna bridge in Kampong Cham, river dolphins in Kratie, Yeak Laom lake in Ratanakkiri (the drone had to rise 300 meters to capture the whole lake). To give the documentary a sharper focus, the film also includes interviews with a cast of compelling Cambodian characters, including Phnom Penh’s first female tuk-tuk driver and an environmentalist monk. French director Gilles Sainsily, 35, shot the film with a Panasonic DMC-GH4k and a GoPro Hero 3Plus, entirely in 4K. “It’s like double full HD,” he said.

Sainsily used three separate drones in the making of Enchanted, though only two survived the filming process; one unlucky flying machine was lost to the waters off Sihanoukville despite a scuba dive search mission by the director. In another road-bump, Sainsily and a filmmaker friend were arrested and detained for several hours by authorities after flying a drone near Hun Sen’s Phnom Penh residence without permission in June. Sainsily’s creative assistant, longtime Belgian girlfriend and “muse”, Tisan Oumazza, 30, said the idea for Enchanted developed off a whim.

“He had this drone but couldn’t really use it in Phnom Penh [because of permit requirements] so we decided to get a car and drive around the country with the drone and just have fun,” she said.

In a $30-a-day Toyota Camry the pair embarked on a weeklong tour of the northern provinces.

“There was no air filtration system. If the road was dusty, dirt would get in and shoot up in your face. We had to wear masks in the car!” said Sainsily. “Every night we’d look through the shots and both of us would be like, ‘It’s so beautiful; it’s so amazing’. The third day looking at the shots [Oumazza] said, ‘You know what, why don’t you just do a documentary with all this footage?’” he said.

The film shot on that excursion was combined with spare shots that Sainsily had compiled over three years as a full-time freelance videographer working for local NGOs and companies.

Sainsily said that one of the most memorable moments of filming Enchanted was while shooting a segment on deforestation in Oddar Meanchey’s Samrong forest. Accompanying him was Bun Saluth who had been tasked by the government with protecting the more-than 18,000 hectare area from illegal loggers. The monk was holding Sainsily’s viewing monitor as his drone flew over the trees. It was the first time that the Buddhist activist had seen his forest from the sky.

“At first he was enjoying it and smiling.

Then [the drone] reached where the forest [had been cut down].

Even he didn’t realise how close [by] this deforestation was happening,” remembered Sainsily.

Enchanted, which will premier at the Meta House on September 5, is not yet complete.

There are still some important shots missing, including ones of Angkor Wat; Sainsily only just received the permission to shoot there.

He is also still awaiting the green light to shoot at Preah Vihear.

“It is a process. Nothing is fixed. Everything can move,” said the director, adding assurances that Angkor Wat would “definitely” be in the film by the time of the Meta House screening. With that event, the pair hoped to attract investors to make up for production costs and cover entry fees for film festivals. But even if no one bites, they said, they would continue to cover costs themselves.

“For us, having these images is like having a postcard for life,” said Oumazza. “It’s our baby.”