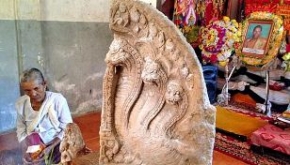 Villagers in Siem Reap province’s Angkor Chum district have uncovered an ancient statue in the shape of a dragon and won the right to keep it at the local pagoda, believing it will bring luck to the village.

Two cowherds discovered the statue when they were out in the fields. The pair thought they had heard a frog call from a hole and began to dig up the ground in search of an afternoon snack. But instead they revealed the priceless artefact. According to an announcement from the Apsara Authority, the body that oversees the Angkor Archeological Park, said the villagers believed the statue was a representation of an ancient dragon king, who would bestow happiness on the Kok Doung commune villagers if they prayed to it.

“It is the villagers’ belief that the statue is a kind of dragon king who appeared now to bring happiness to the villages, and the Apsara Authority thought that the villagers will take good care this statue,” the statement says.

The statue is now on display at a local pagoda.

Houn Nouy, one of the two cattle farmers who found the statue, said he was not sure of its origin or value.

“The villagers were surprised about this dragon statue. We think the statue has appeared to give happiness to the villagers,” he said.

An Apsara Authority representative could not be reached.