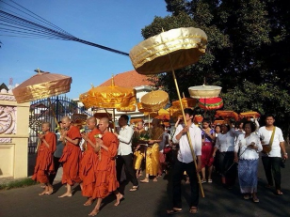 This coming Wednesday July 29th 2015 – on the day monks will shave their heads the day prior of the Full moon of July –, Cambodian people will mark "Pikthi Bambuos Neak Kh’naan”, the young novice monks’ ordination ceremony which indeed is a very elaborate ceremony in which participates the whole village, and young boys who enter into monkhood are the pride of their respective parents.

Since the ancient times and according to ancestral traditions, young Cambodian boy must "enter into monkhood" at least two times in his life, first at puberty around the age of 11~12 year old, for “thanking his mother for delivering him into the world”. During his stay at the monastery, the boy will receive the basics of the Khmer language and calculations, as public school education was not available in those days it was the monks who provided education, this in addition to Buddhist religious education where the young boy will learn the “transition into the adult world”. The duration of the monkhood stay of approximately six months is often modeled after the period of the rainy season, from June to November. According to the "wealth of the family" the boy can, after this short stay, “leave the orders” and return to live with his parents, or if the family is poor, he can remain all the time until the "second monkhood period" of the “rainy season retirement”, and we can generally talk of the "vossà" period and number (of rainy seasons) in lieu of “years”.

The second stay in a monastery will be carried out when the young adult man –at an age to get married and to “thanking his father for giving education” –, in general at 17~18 year old (in those times, it was most often an arranged marriage between the two families). This second stay is a little longer because the young man needs to prepare himself for the entry into adulthood and working life, and only monks had the professional knowledge required, namely the trades of carpentry, building - the young man must be able to help the family of his young fiancée to "enlarge" the family home since he will go to live there with his young bride - and for the preparations for the wedding which will take place in the House of the girl’s parents, a "reminder" of the Legend of Prince Preah Thaong and Princess Nagi - Neang Neakh and the Creation of the Kingdom of Cambodia, where the Prince follows his beloved wife-to-be in the underwater Realm of the Naga King. If the young man is good at sculpture and crafts, he will benefit from his stay to sculpt the finest loom 'pulleys' – since the pulleys are always in "couple", and send it to his beloved as his token of love for his future wife, who in the meantime has “retired into the shadow” (see text on "Pikthi Chhohl M’Lop"). Indeed, the more his love for his future wife is powerful and immense, the more details of the sculptures of the two pulleys will be refined.

"Pikthi Bambuos Neak”, the young monks’ordination ceremony is indeed a very elaborate ceremony in which participates the whole village, and young boys who enter into monkhood are the pride of their respective parents.